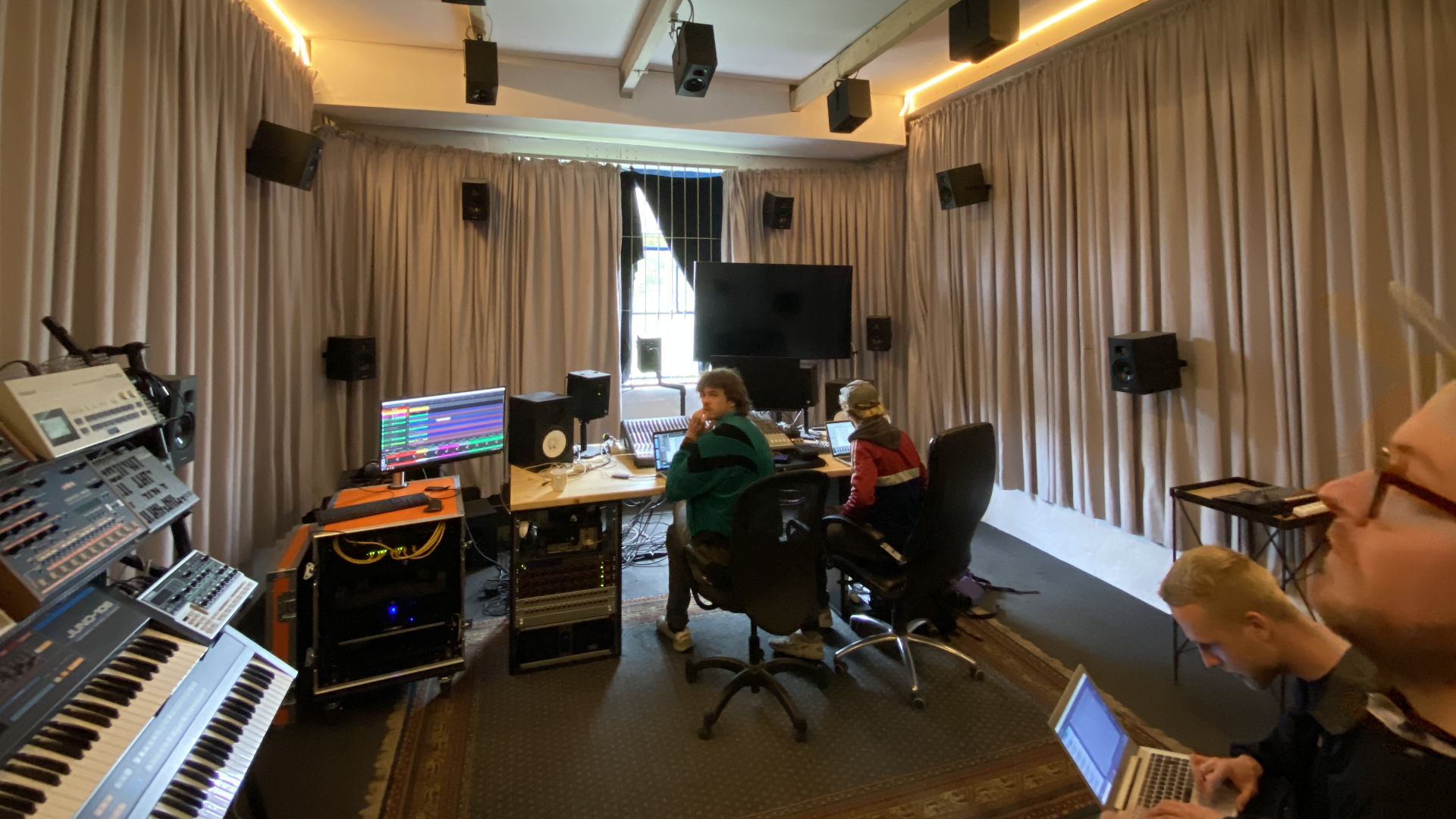 Not a Number Studio

On Monday, June 8th 2020 the Spatial Media Lab visited Not a Number studios in Leipzig. We met with Felix Deufel and fellow members of the studio–Martin Recker, Paul Hauptmeyer, Jason Langheim, Nina Buttendorf, and Jakob–to nerd out on spatial audio and discuss working in planetariums across Germany.

We met Felix and the others at their studio at the Zentrum für immersive Medien, Musik und Technologie (ZiMMT). ZiMMT is a co-working, maker space Felix and Paul started in 2019. Currently they’re working on finishing the performance area, which is intended to be used to host a spatial audio conference called Immersive Sound – Forum for 3D Audio at the end of 2020.

In the studio they have 24 Adam T5V loud speakers distributed evenly throughout the space and a subwoofer. We listened to pieces we produced for the Spherea #1 and Contentious Constants II shows held in the Zeiss Großplanetarium (ZGP) Berlin. We gained some interesting insights, especially how the compositions behave differently in changing acoustical environments. F Additionally we made the realization that we had previously been EQing on the Ambisonic Master on our template which resulted in the EQ being rendered in the recording. However, due to the unique acoustic qualities of the ZGP this can result in mumbly sounding recordings. We have since updated our template to have the final EQ stage on the Speaker decoder channel, rather than the Ambisonic Master.

We also listened to some of Martin Recker and Paul Hauptmaier’s works in VBAP produced by their own build panning algorithm based on a Max-Patch.

Two particularly unique features of Martin’s VBAP compositions were how at certain points when waves were combining in the center of the space one would get the impression of the sounds actually traveling within the space, and not just around the sphere. Another was a type of swarm effect where lots of tiny sounds were playing out of different channels within milliseconds, creating a truly immersive experience.

Felix is sound designer and audio engineer specialized in 3D Audio applications and productions. His passion is recording, composing and designing unique sounds and music for spatialized scenarios. He is planning and operating 3D sound systems for live concerts and venues. Deufel is the founder of Not a Number GmbH. His current project is a software development in the field of 3D audio and the development of the ZiMMT (Zentrum für immersive Medienkunst, Musik und Technologie) in Leipzig.

We also created an IEM SpeakerDecoder Template for their studio, as well as the Speaker Coordinates.

Websites: ZiMMT | Not a Number

ZiMMT plans to host a spatial audio event at the end of the year at their space in Leipzig. They are currently developing the program, and what we heard sounded very promising! We’re definitely looking forward to this.

Thanks again for the warm welcome!
We’ll see you soon!